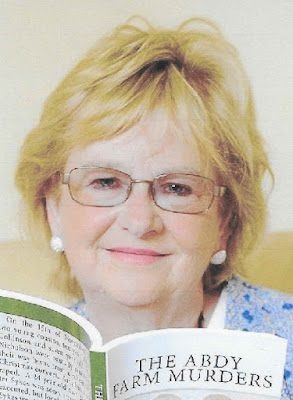 ... to my blog today.  Thanks for making some of your precious time available to us, Jeanette.  Now tell me, What is your current release?
JH   My latest book, released late in 2018 is an anthology of crimes committed in North Yorkshire: “North Yorkshire Moors Murders”, but if I were to point anyone unfamiliar with my work to the book that I think is my best so far it would be “The Abdy Farm Murders”.
AW   Real crime - how interesting!  What first got you into writing and why?
JH    For as long as I can remember, I have been fascinated by true crime and I’ve read endless books in that genre.  I never expected that I would write any.  However, when I was about nine years old, I sat listening as my grandma told me stories from the past.  Most of the things she told me were about long-dead family members, and I was too young to have any real understanding or interest in such stories, but she got my full attention when she told me about the murder of a girl; committed by someone that she knew.  The story stayed in the back of my mind until 2014 when I came across an account of the crime in a book called  “Rotherham Murders” by Margaret Drinkall.  It was so good to be reading more details about the crime after all those years, but I was stunned when I got to the end of the story and read the name of the person that was hanged for the crime. It wasn’t the person that grandma had named.  Persuaded, egged-on and bullied by my younger sister, I spent about a year researching the crime, and came to the conclusion that there had been a miscarriage of justice.  I believe that the person named by my grandma did in fact commit the murder and that an innocent man went to the gallows for it.  Then I wrote the book “The Rotherham Trunk Murder” and published it in 2016.
AW  You write real crime.  I suppose that means that you also undertake a great deal of research.  How do you keep the reader interested and make the facts much more than a series of notes?
JH   I learnt a great deal, of course, from all the true crime books that I have read over the years.  Without consciously realising it, I was always analysing the difference between interesting true crime books, and those that were less so. That, of course, has been extremely useful to me since I became a true crime writer.  I feel that the secret of a good true crime book is to ensure that readers “get to know” the people in the story, and to care about what happens to them. The story needs to be brought to life and to engage people’s emotions: sadness, horror, anger, sympathy etc.  I also like to try, as far as possible, to keep the case as a whodunnit, in order to hold the reader’s interest throughout the book.  One reviewer called me the true crime Agatha Christie, which I thought was very flattering, although I don’t pretend to be in Agatha’s league.  My pet hate in books is “padding out” where irrelevant information is added in to bulk out the book, and so I never ever do that. 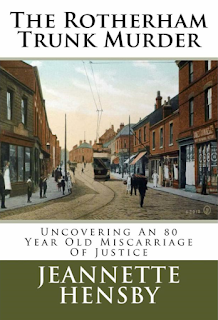 AW  Agatha Chrisite - I cut my reading teeth on her books and I still re-read her novels too.  But what about other types of writing?  Have you ever dabbled with creative writing in any form?
JH   Since I published my first book in 2016, I have published a further four, and I am researching a fifth at the moment.  I really enjoy researching/investigating true crimes and then working out how to structure the book to make it interesting.  The structuring is as far as my creative talents go.  I don’t have the imagination to write poetry or fiction, so I have no desire to try any sort of real creative writing and I’m sure that, if I did, no-one would want to read it!
AW  Famous authors, such as Roald Dahl and Dylan Thomas, had a special space for writing.  Do you have a writing ‘shed’ of your own?
JH   I have an upstairs study that looks out over a beautiful back garden, which backs onto open countryside.  The only downside is trying not to get distracted by all the wildlife that visits the garden, and spend time looking out of the window instead of writing.
AW  Finally, if you had a whole afternoon to yourself and could choose to spend it with any one individual, living or dead or a character from a book, who would it be, and what would you want to discuss?
JH   If I could spend an afternoon with anyone, it would be with the American true crime writer Ann Rule, sadly no longer with us.  If anyone knew how to write a book that drew you in, and touched every emotion it was Ann.  The story of how she got into writing is fascinating.  She worked as a volunteer answering the phone in a “Samaritans” type capacity, and a fellow volunteer working alongside her was the man who was eventually found to be the serial killer Ted Bundy.  She was interested in becoming a crime writer (having worked as a police officer) and had secured a book deal for her to write her first book.  The deal was for her to write the story of the serial killer once he was caught.  When Bundy was caught, he was allowed the one phone call, and it wasn’t to a lawyer it was to Ann.  He said “Go write your book Ann”.  I was interviewed in December by true crime writer/actor/broadcaster Burl Barer on his show ‘True Crime Uncensored’ live from Los Angeles.  He had met Ann, and it was so interesting to hear anecdotes from someone who had had that privilege.  If I could spend an afternoon with her, I should just like to listen to her talk about the cases that she was involved with, and to gather any writing tips that she would share. 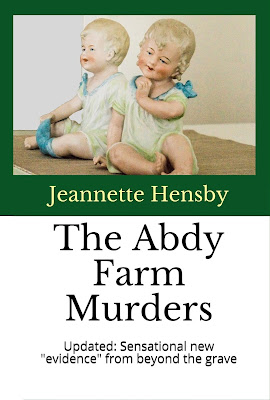 ... about the book On the 15th of November 1912, two young cousins, ten year old Amy Collinson and seven year old Frances Nicholson were brutally murdered on their way home from a rehearsal for a Christmas concert.  Amy had also been raped.  A 24 year old man called Walter Sykes was soon arrested, tried and executed, but local people thought that Sykes was innocent and that Amy's foster father, Arthur Collinson, was the perpetrator of this horrendous crime.  More than a hundred years later, local people still believe that to be true. The author examines all the evidence to try to answer the question as to who committed the crime.  Was it Walter Sykes?  Was it Arthur Collinson?  Or was it someone else?
The updated version of the book gives fascinating information provided by a Spiritualist medium to a family member - allegedly from the murdered girls themselves.

...about the author A long career in Local Government Social Services Departments, and in N.H.S. Mental Health Services in Sheffield instilled in  me a keen interest in psychology and in people’s behaviour. When I took early retirement I envisaged a lazy life with lots of  time to indulge myself in one of my favourite pastimes - reading True Crime books, but that wasn’t to be. A childhood memory, a dark family secret, and a possible miscarriage of justice led me to thoroughly research an eighty year old crime, and then to write a book about it “The Rotherham Trunk Murder”, which I published in 2016.  I had caught the writing”bug” and a whole new career has opened up for me, researching and writing about true crime cases; with a particular interest in those that might have involved a miscarriage of justice. I have been particularly pleased to hear from relatives involved in two of the cases that I have written about after the books were published, resulting in me republishing both “The Rotherham Trunk Murder” and “The Abdy Farm Murders” in 2018, with new information from relatives added.