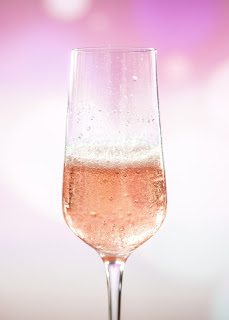 All the excitement and work building up to publication day suddenly comes to an end and it is not unusual to feel kind of bereft.  As an actor, I encounter this every time I complete a role.  The curtain on the last performance is down, the audience has left, the make-up has been removed for the last time and the costume hung up for the wardrobe team to clean and return to the costume store.
When I'm working on stage I become something of a night owl.  I eat when I get home, which can be as late as 11 or midnight and then I have to let the adrenaline needed to get me through the performance abate.  So I often read and have a glass of wine... or maybe two!
Strangely, after publication day yesterday, I found myself doing exactly the same thing.  I had dinner - a light snack really as I had been grazing for most of the day - at about 9.30pm and then I settled down to read for a couple of hours with a glass of bubbly.  Not my usual choice of wine following a final performance, that's normally a fruity red, a Julienas or a Morgan.   It was bubbly last night because it was left over and it was publication day.  My book was Little Mexican and Other Stories by Aldous Huxley.  A gentle read and I chose which stories and the order.
Today I thought I would calm things down a little by giving you a short and gentle excerpt from Montbel...

thursday, june 9th
The village of Montbel was some eight kilometres from Messandrierre. Sitting at the centre of an expanse of high pasture, it was surrounded by a series of fenced off areas. From some, the large ancient boulders that had been deposited across the landscape as the ancient ice sheets had retreated had been removed and casually left in out-of-the-way corners of the enclosures. These open spaces were cultivated with crops growing tall and pear-green in the early summer sunshine. Other spaces were occupied by small groups of Aubrac cattle whose sole purpose for their days seemed to be to graze, to sit for hours, and to graze again.
The D6, which stretched eastwards from the main interchange between Mende and Le Puy-en-Velay, sliced the village of Montbel in two as it meandered its way across the high valley to a final junction in La Bastide-Puylaurent. The sign on the wall of the first house on the right announced that the numbered, but nameless, road became Grande Rue at that point. Jacques slowed down and looked to his left and, as described, a long stone barn stood end on to the street. In front of it was a large enclosed area with black- and gold-painted metal fencing set into a low stone wall.
Jacques pulled up, removed his helmet and wheeled his motorbike across the road, down the short track in front of the converted barn, and into the beautifully planted front garden. He rested his bike on the steady just inside the main gate and placed his helmet on the seat.
“Monsieur Forêt, I presume?” Étienne Vauclain rose from his patio chair and walked towards Jacques.
“Call me Jacques,” he said as he shook Vauclain’s outstretched hand.
The man was much shorter than Jacques had imagined, his hair, thick and grey, was swept back and expensive dark glasses hid his eyes. Jacques followed him to the patio area and took a seat at the table in the shade.
“Coffee?” Vauclain steadily pushed the plunger of the cafetière to the bottom of the large pot.
“Yes, please.” Jacques glanced past his interviewee and through the open French windows into the house. The windows on the far side of the building were shuttered against the sun, but despite the interior gloom, Jacques could make out a gallery that he assumed ran the full length of the building. Above, he could see the edges of the beams of the roof and within the body of the visible space, comfortable and very fashionable furnishings.
“On the phone yesterday, you said I may be able to help you with some enquiries,” said Vauclain as he pushed a cup and saucer across the table to Jacques.

Montbel, the third in the Jacques Forêt mystery series and available in print and e-format.
Posted by Angela Wren at 06:00