I'm reviewing The House in Paris... 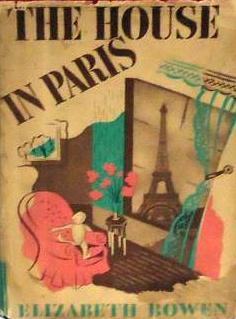 First published in 1935, this book is considered to be her best novel.  I have to disagree with that.  Along with her novels Bowen was a great short story writer and some of her anthologies are fascinating reads.  I particularly like her ghost stories, which can rival the best that M R James and his ilk can offer.
Born in Dublin in 1899, she spent a happy childhood in Ireland until her father became seriously ill and her mother moved the family to London when Elizabeth was only 8.  Subsequently becoming an orphan at the age of 13, Bowen was adopted and brought up by her aunts.  I believe that her upbringing shows through a number of the characters in her novels.  As an adult she was close to the Bloomsbury set and knew the novelist John Buchan and his wife well.  With such literary connections it is easy to understand why she fell into writing.
The House in Paris has been sitting on my bookshelf for a number years - mine is the first American edition.  You need to own a bank to afford a copy of the first English edition!  Whilst I was in France recently I thought it was time for me to re-acquaint myself with the story.  I am so glad that I did.  As with all of her novels and stories, the various scenes played out in my mind’s eye as though I was watching a play.
The story begins in 1935 in a house in Paris where Henrietta meets Miss Fisher and then meets Leopold, a little boy also in the care of Miss Fisher whilst in Paris.  Leopold is waiting to meet his mother for the first time.  The two children strike up a nominal friendship whilst waiting until Miss Fisher brings Leopold the devastating news that his mother is not coming.
The story then shifts in time and point of view and it is only then that the significance of 'The House' and Miss Fisher's residence there becomes apparent.  And Bowen does what she does best!  She peels back the surface personas to reveal the lies and self-delusions beneath.  She expertly examines the dynamics between her characters and the choices they make.  Each choice affecting their respective futures, their understanding of passion, love, marriage and trust.
The final section of the book moves back to 1935 and that same afternoon in the house in Paris.  We find out why Leopold is left waiting for his mother and the relationship between him, the other characters and Miss Fisher becomes abundantly clear.
This is a sad story that is beautifully told with flowing and lyrical prose but with an unexpected ending.  Bowen achieves her objective of looking at what lies beneath the norm, as she always does and this is a book that I will return to again and again.
Posted by Angela Wren at 06:00