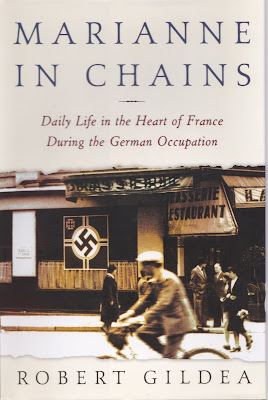 This book was recommended to me as a 'first class treatise' on France during the occupation.  As I'm not an historian I am not really qualified to comment on the veracity of that particular description and my review will not attempt, in any way, to do so.  But, having had the book sold to me thus, I have to say that I am very glad I bought it and read it.

As an avid reader, a very ordinary traveller through life and France, I am often drawn to books about the life and times of one of my most favourite places.  The country is vast, it's history inextricably linked with our own, the geography is varied and the culture and customs fascinating.  I am still learning about this amazing place.  And Gildea's book has been no small part of my most recent learning.

It is a vast tome.  At over 400 pages of information and comment, supplemented by a further 90+ of appendices and detailed index, it is not a book to picked up in the hope of an easy or quick read.  That being said, once I had accustomed myself to the style of writing and the format, I did get through it in about 7 days as I found the content so fascinating, it was very difficult to put it down.

Focusing on the period from June 1940 to the end of the war, Gildea uses archive material, personal interviews, diaries and eyewitness accounts to set out what life was like, for people across the the social strata of the time, in 3 specific départements during the occupation (in my experience now referred to by the French as les années noires).  The area 'of study' that he uses stretches from the west coast inland to just east of the tiny village of Bléré on the river Cher and north to south from Chateaubriant to Machecoul.  In terms of the geography it represents - I would guess - between 5% and 7% of the whole country.  So it is not a particularly large sample area.  However, it is an area where I have a spent a great deal of time, with cities, towns and villages that I know well.  So, reading about the history of that dark period, as evidenced by the seemingly vast array of records, papers and information that Gildea examined, was a bit like discovering the difficult past of a very old friend.

It is clear from early on in the book that Gildea is seeking to present a particular view of that time in history.  What I can say is, that I was overwhelmed by the breadth of evidence presented, the detail included and what I concluded was that people, no matter what their background, were doing their best to survive in very difficult circumstances.  A society of people constantly forced to make choices, where the alternatives were frequently 'a rock' or 'a hard place'.  I often found myself wondering how I would have reacted had I been there, faced with the same challenges and difficult choices.  A thought-provoking, and at times very moving, book that I feel has informed and helped me to a greater level of understanding about this period in French history.  And that, in no way means that I agree wholeheartedly with all of Gildea's conclusions.

I will be visiting Tours at the end of the month.  If you would like to join me, there will be more about this city's role under the occupation.
Posted by Angela Wren at 06:00