... Jennifer Wilson to my blog today.  Hello Jennifer, nice to see you again and I think you've got another book out haven't you?

JW   Hi Angela, and thanks for inviting me back onto your blog today.  I thought, for a change, I’d do one of my own Sunday Sojourn-style posts, and write about one of the locations in my new novel, Kindred Spirits: Royal Mile, which is released tomorrow.

JW  Speaking of releases, just to be cheeky, you and your readers are all more than welcome to my online launch party, this Thursday, on Facebook. We’ll be having (virtual) food, drink and celebrations, as well as competitions and guests – click here and say ‘going’, to get involved.
AW   Thanks, Jennifer and yes I will make a point of dropping in when I can.

JW  But now, back to the location. I’ve always been fascinated by the history of Edinburgh Castle, tales of the Black Dinner, sieges and scaling cliff-faces, but for today, we’re heading to the other end of the Mile, to Holyrood Palace, a place that for some reason, I’d never thought of visiting until a couple of years ago.  Since that first visit though, I’ve become really fond of the place, and the final room, filled with historical treasures, is one of my favourite rooms in the world.
But to the palace itself.  Sadly, I’ve no photos of the interior, but then, neither do any other visitors.  As it is still a functioning royal palace (the Queen visits at least once a year, for about a week), photos are only allowed outside, but that’s stunning enough, so we’ll be ok with that!
The original Holyrood Abbey was founded in 1128, as ordered by David I of Scotland, who, according to legend, saw a vision of the cross in the area.  The Abbey became an important location for Scottish royals and ruling, with parliaments being held, and monarchs being buried there.  Then, probably to give his new Tudor wife somewhere more pleasant than the Castle to stay at, James IV built a grander Palace, attached to the Abbey; this was destroyed when the English sacked Edinburgh during the Rough Wooing.  Over the following centuries, the Palace was modernised, and abandoned for a while by the royal family when they became monarchs of Britain, not just Scotland, but was used by Queen Victoria, who was responsible for much of the current décor.
One of the Palace’s most famous residents, Mary Queen of Scots, arrived in 1561, and her rooms are now probably the most famous, at the end of the public rooms.  It’s in this suite that one of the most famous incidents of the whole Royal Mile took place; the murder of David Rizzio, Queen Mary’s Italian secretary.  The man had been having supper with Mary and a couple of other companions in a (surprising small) side-room, when Lord Darnley, Mary’s husband, burst in with several other nobles, dragged the poor Rizzio out, and left his body in the queen’s ante-chamber, a total of 56 stab-wounds inflicted.
It’s the ante-chamber I mentioned earlier, one of my favourite rooms.  It’s full of pieces connected to Mary and the monarchs which followed her, with beautiful hand-written notes on each, in stunning glass cases.  It makes you feel like the first tourists who came through the Palace, having paid the housekeepers and other staff to let them in when the place wasn’t being used.
With so much history in the place, there’s no way I could write about Mary, and her Edinburgh, without including her Palace, and as it gave me an excuse to go and visit again, I’m extra glad that I did!
AW   What a fascinating place it is and when I'm next in the city I will visit.  Unfortunately when I was there last month, my time was short and I had a long list of other things to do and the palace just didn't quite make i t to the top of the page.  Thank you Jennifer and I wish you well with the book. 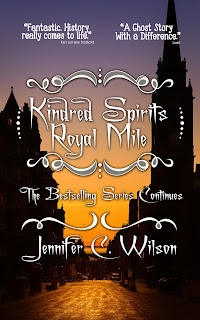 about the author... Jennifer is a marine biologist by training, who spent much of her childhood stalking Mary, Queen of Scots (initially accidentally, but then with intention). She completed her BSc and MSc at the University of Hull, and has worked as a marine environmental consulting since graduating. Enrolling on an adult education workshop on her return to the north-east reignited Jennifer’s pastime of creative writing, and she has been filling notebooks ever since. In 2014, Jennifer won the Story Tyne short story competition, and also continues to develop her poetic voice, reading at a number of events, and with several pieces available online. She is also part of The Next Page, running workshops and other literary events in North Tyneside.


Jennifer’s debut novel, Kindred Spirits: Tower of London, was released by Crooked Cat Books in October 2015, and Kindred Spirits: Royal Mile is coming June 2017. She can be found online at her website, on Twitter and Facebook, as well as at The Next Page’s website.