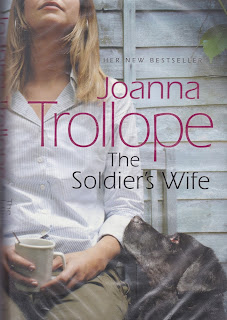 Published in 2012, I expected that this book would give me insights into army families and army life in general, both on the frontline and away from it.  Because I was expecting so much, I was disappointed.  However, that does not mean that the book completely failed to deliver nor that the story was not worth reading.  It is, on some levels.
The story focusses on Alexa Riley, an army wife married to Major Dan Riley, who is about to return from a tour of duty in Afghanistan, and their children.  Instantly you know that this book will be about family dynamics and relationships.  That was the first issue that made me wonder if I should continue reading, but I did.
As the story progresses you hit on the problem of a battle-hardened man being back in a domestic situation and not able to share in detail what he had been doing whilst away.  Both Dan and Alexa are not sure how to relate to each other, how to slip back into those once, well-known routines and become a cohesive family again.  I thought this particular aspect of the story was handled really well and was clearly well-researched.  For some families in real life it must be very difficult when mum or dad comes back after a tour.  I was able to empathise with the situation, two people in a difficult place and not able to communicate effectively.  Tough.  But I found the character of Alexa very difficult to like.
When the extended family started to get involved in Dan and Alexa’s relationship, I became more and more annoyed that neither the husband nor wife would stand up and tell them to butt out.  I became less and less sympathetic to Alexa.  And when she turns down a job that she wanted because she is not only married to Dan, but the army as well, I wanted to scream because I saw her as being very weak.
Isabel, Alexa’s daughter from her first marriage, starts to take charge of her own life and runs away from boarding school and I hope that, in response, these two parents will stop, listen and work out what is best for them as individuals and as a family.  But there was more disappointment for me.
Overall, I found the prose to beautifully written, the story to be over long and the characters to be mostly tiresome.  But I did come to an understanding of what being an army wife means.  I can honestly say that it made me realise that I have been very lucky in my own personal life.  Whilst I would not have chosen to read this book for myself, I am pleased that I persevered with it.  It has provided me with an interesting insight into life in the army.
Posted by Angela Wren at 06:00