A Spring Wedding in...

…Moscow.  The spring flowers are in full bloom and showing off their brightly coloured petals in the rockery and across my garden and I am always reminded of Moscow...

I was there at the beginning of March for a wedding and I remember there being daffoldil yellow and crocus mauve flags hanging from every available lampost throughout the city to acknowledge the first day of Spring.

The day of the wedding was cold, there was snow on the ground and the heavy morning clouds threatened yet more.  But, at the home of the bride, the groom had to pay a ransom otherwise there would be no ceremony.  To my modern and highly independent mind such an act seemed wrong, but it’s hard to argue with an amusing tradition.  Armed with flowers and gifts the groom arrived and when the ransom was satisfactorily paid, the couple were given a blessing by the bride’s father and the whole wedding party removed to the appropriate municipal building for the civil ceremony.

It was what happened next that mesmerised me.  The whole wedding party took to the streets of Moscow to have photographs taken at historic or meaningful locations.  I was lucky enough to be driven around the city in a Zil, a large square of a car in black and I remember thinking that it was an unusual choice.  One of the stops for photos had to be Red Square. The colours of St Basil’s Cathedral stood out like beams of light against the dull sky.  Built and added to between the 12th and 16th centuries, it’s properly called Intercession Cathedral and was erected to commemorate the Russian conquest of the Khanate of Kazan.  Standing in its wake, I was introduced to small bread rolls filled with something akin to mortadella and a sweet but piquant pickle sauce that set my taste buds zinging.  Alas, I never did get that recipe!

It was whilst we were all waiting for the photographs to be taken that I was approached by a man selling tickets for the Bolshoi.  I’d tried to get a ticket before leaving the UK, but every performance for months was fully booked.  I was suspicious at first, but the more the man kept talking and telling me about the theatre, the more I had to have that ticket.  So, I handed over the roubles.  ‘No, no American dollars,’ he said. ‘American dollars are good.’  The following evening, still wondering whether I might have broken the law or not, I sat in the Gods at the Bolshoi and watched a performance of Eugene Onegin.  The opulence, the artistry of the ceiling above my head and the vastness of the auditorium, have to be witnessed to be believed.

Around Red Square there are a number of churches.  All stunning with their traditionally shaped gold cupolas and magnificent murals and decoration inside.  I can understand why any bride would want a photograph with such a building as the backdrop. 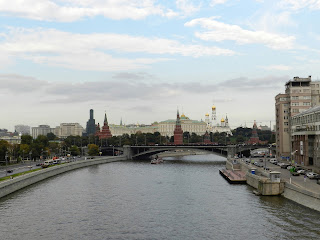 The wedding party moved on and I had the chance to see the vastness of the river Moskva, the wide streets, the GUM department store, the English book shop and much more besides.  But it was the reception next and I remember the table groaning under the weight of food and vodka.

And there was another little tradition to be witnessed.  The bride and groom are presented with bread and salt.  The bread is a beautifully decorated circular loaf into which a small dish is placed and filled with salt.  The two are placed on an embroidered cloth and then given to the bride and groom to taste.  You break a piece of bread and dip it in the salt and eat.  This signifies a long and happy life together.

Then there are the toasts.  I have only one tiny drop of vodka in the bottom of a shot glass just to be polite.  The rest of the evening is spent eating, drinking, singing Russian folk songs and dancing as course after course is brought and empty plates are taken away again.  An incredible experience that has remained with me.  And the bride and groom... just in case you were wondering, they lived happily ever after!

I will be taking you on some strolls through fascinating places in France over the next few months, so watch this space.
Posted by Angela Wren at 06:00