Dagda  Greetings Scribe Angela.
AW  Well, hello Dagda and thank you for agreeing to appear on my blog this week.  Would you like to tell us a little about yourself?
D    I am Dagda from Scribe Ailsa's books ‘Alchemy’ and ‘Shaman's Drum’.  You meet me first as a young Captain in the Black Shaman's Guild who is given Riga, the female lead, to train.  By the second book, I am head of the Guild.

AW  Wow!  That’s some achievement.  But tell me Dagda, have you always lived in one place?
D     I understand that the theme of your blog this month has been travel and living abroad.  Yes, I know a great deal about that.  In my nearly forty years on this good earth I have changed countries and continents.  I have had the pleasure of meeting and living with people from other cultures, which was enriching sometimes and irritating at others.

AW  So where are you from originally?
D     I was born to the Oneida people, part of the Iroquois tribes on the edge of Lake Ottawa facing Canada.  We are a woodland tribe, not much given to horse riding apart from for pleasure or ceremony, something I would find tiresome in my travels.

AW  How interesting!  And what can you tell us about Ailsa’s…sorry, I mean Scribe Ailsa’s plans for you? 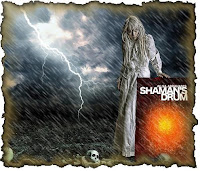 D     You will find in a forthcoming book from Scribe Ailsa, my history, once Riga, my Blood-Daughter, is moved from me.  I will not tell too much of that, my new travels, as she has asked me not to spoil it for you.  I will reveal that I take to the road again, including flying which, I loathe.  My tribal name is Death Eagle, which means ‘owl’, and if I were meant to fly I would have been able to take that form.  Being a magic-user I am unable to use modern technology such as computers, telephones or other electrical gadgetry.  Usually these blow up if I touch them so I rely on Once-Born friends to do this for me.  You will imagine my trepidation being up in the air, reliant on a Once-Born in another element, one in which I was not meant to be.  Water, Earth and Fire are my kin but Air is not my home.  You will read why I have to undertake this task when the book is released.
AW  I see.  Go on…
D     In my youth, son of the Faith Keeper (no, not medicine-man) I was being trained to take over but life took a turn.  Perhaps Spirit was guiding me onto the path I was supposed to follow but my heart was broken and my people disowned me in one moon.  I left the Res (reservation) and travelled south to find a cousin who had married out into the Navajo people with a girl who had been on a scholarship exchange in the Res school.  They took me in and helped me recover.  My cousin was a Navajo Ranger, and welcomed my powers and knowledge for assistance in ‘paranormal’ incidents.  The Navajo are a gentle and friendly people who accepted me as their own until I came of age and knew that I had to find my own path which, Spirit would reveal to me.
I heard of the Black Shaman's Guild in England and a light flicked on in my head.  Here were a group of wands for hire, all dedicated to retribution and using the kind of magic to which I had been led in my younger life.  I packed a small bag and my cousin's family paid my airfare to London.
Being a Native American in London in the mid 1990s, aged sixteen, was a very strange experience.  Older people 's expectations were based on Western movies and I became tired of answering ‘Where's yer horse then, Chief?’ which was not meant unkindly but wasn't very original.
Younger people had a better grounding in what modern Native Americans are like, many of us having become quite famous film stars and singers.  Unfortunately they adopted a weird way of speaking to me that they felt was ‘spiritual’ and New Age.  I was pleased to be accepted into the enclosed order of the Black Shamans.

AW  Fascinating.  But what about Riga?
D     My protégé, Riga, was given to me to train as a final test aged seven.  She was from Latvia, of traditional Shamanic stock but wild and uncontrollable.  If I could teach her I would secure my place in the Guild forever...or so I thought at the time.  I learned her Latvian traditions too.
AW  So what’s next for you?
D     My next journey will be to a new land – my home but thirty years on.  How will it have changed?  How will people feel about me?  Will I still be an outcast?  Why have I been called back?

AW  I can’t wait!  It has been amazing to meet you Dagda and thank you for coming.
D     Thank you Scribe Angela for inviting me and accept this gift of spicy fruitcake from Scribe Ailsa who sends her regards.  Spirit guide and shield you.
AW  Spicy fruitcake…scrummy!  Thank you and please pass on my best wishes to Scribe Ailsa 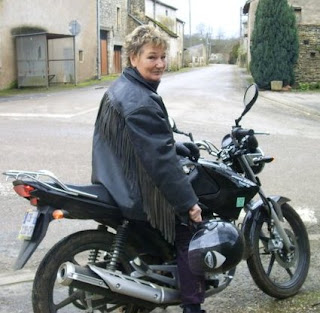 About the author...  Ailsa Abraham writes under two names and is the author of six novels.  Alchemy is the prequel to Shaman's Drum, published by Crooked Cat in January 2014.  Both are best sellers in their genres on Amazon.  She has also written gay male romance under her brother's name, Cameron Lawton.
She has lived in France since 1990, enjoys knitting/crochet and until recently was the oldest Hell's Angel in town.  Her interests include campaigning for animal rights, experimenting with different genres of writing and trips back to the UK to visit friends and family.  She runs an orphanage for homeless teddy bears and contributes a lot of work to Knit for Africa.  She is also addicted to dressing up, saying that she is old enough to know better but too wise to care.