TT  Hello Angela, many thanks for inviting me along today. 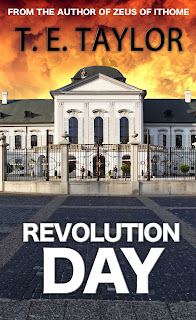 AW  You're very welcome Tim and I know your time is precious,so tell me, what is your current release?
TT  My most recent novel, Revolution Day, follows a year in the life of ageing Latin American dictator, Carlos Almanzor, who is feeling increasingly insecure and paranoid as he clings on to power.  His estranged and imprisoned wife, Juanita, is writing a memoir in which she recalls the history of their marriage and Carlos’s regime, charting its long descent from idealism into repression.
Meanwhile, the vice-President, Manuel, is burning with frustration at his subordinate role.  When his attempts to increase his profile are met with humiliating rejection, he resolves to take action.  But lacking a military power base, he must pursue power not by force but through intrigue, exploiting his role as Minister of Information to manipulate the perceptions of Carlos and those around him and drive a wedge between the President and the Army.  As Manuel makes his move, Juanita and others close to Carlos find themselves unwittingly drawn into his plans.
For the last week in June and the first two weeks in July (only), Revolution Day is on special offer at 99p/99c.  Further information on the novel, including excerpts and reviews, is available on its page on my website.

AW   What first got you into writing and why?
TT  I’ve always had a creative urge, and I’ve enjoyed writing ever since I was at primary school.  It’s always been a part of my life at some level.  That said, there have been periods when I have found it difficult to make time to do much serious writing, and others when that creative urge found different outlets.  But in the last few years I’ve been able to give much more time to writing, and I’m very happy about that.

AW  You write historical and contemporary novels.  Is it all imagination or do you also undertake research?
TT  It depends.  My first novel, Zeus of Ithome, was set in ancient Greece and followed real historical events – the struggle of the Messenian people to free themselves from centuries of slavery under their Spartan neighbours, and the wider political and military wrangling between rival Greek states.  I already had a good background knowledge of the Greek world, having studied it at university, but I had to do quite a bit of research into the events I was writing about and certain historical characters who appear in the novel, as well as into the way people lived, dressed, ate and fought.  I read the ancient sources and some modern history books, and made heavy use of Wikipedia and Google Earth (for places and landscape).
Revolution Day, on the other hand, was about fictional events set in a fictional country, so it required a lot less research.  I still did some, though – e.g. into hispanic names.  I also looked at a number of historical dictators, though my character, Carlos, is not based upon anyone in particular.
The novel I am currently writing falls somewhere between the two. It is about a woman’s relationship with her father, as he starts to lose his memory and live increasingly in the past.  I’ve done a fair bit of reading on dementia, and may need to do some historical research about the Second World War period.

AW  And what about other types of writing?  Have you ever dabbled with short stories, for instance, or other genres?
TT  I write poetry and the occasional short story.  I’ve recently been experimenting with spoken word accompanied by music (at open mic events and the like).  I also write academic non-fiction – my background is in philosophy.  Most of my recent research has been on well-being: what it is, how to measure it and its role in public policy.

AW  Famous authors, such as Roald Dahl and Dylan Thomas, had a special space for writing. Do you have a writing ‘shed’ of your own?
TT  Not really. I used to do all my writing in a small room we call ‘the office’, which houses a PC, bookshelves, filing cabinets and the like.  I do still work there (I’m in the office right now), but the trouble is that the PC is such a source of distractions, mostly from the internet, that I don’t work very efficiently on it.  For my current work in progress I’ve taken the decision to write downstairs in the living room.  I do have a music room (another interest of mine), and ultimately I’d like it to become the writing room as well, but at the moment it’s too cluttered up with guitars and other musical paraphernalia.

AW  Finally, if you had a whole afternoon to yourself and could choose to spend it with anyone, living or dead or a character from a book.  Who would it be, and what would you want to discuss?
TT  I’d like to take a person from ancient Greece or Rome, possibly someone like Aristotle or Cicero, and show them as much as possible of the modern world, just to see what they thought of it.

AW  What an interesting idea Tim.  But I’m afraid there’s no room for either or, I’m going to have to press you – Aristotle or Cicero?
TT  It would be great to have them both as it would be interesting to see what they had to say to each other.  But if I'm restricted to just one, as a philosopher, I have to choose Aristotle.  Thanks again for your hospitality, Angela!
AW  You're welcome! 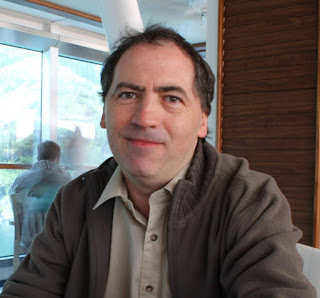 About the author Tim was born in 1960 in Stoke-on-Trent.  He studied Classics at Pembroke College, Oxford (and later Philosophy at Birkbeck, University of London).  After a couple of years playing in a rock band, he joined the Civil Service, eventually leaving in 2011 to spend more time writing.
Tim now lives in Yorkshire with his wife, Rosa, and divides his time between creative writing, academic research and part-time teaching and other work for Leeds and Huddersfield Universities.
Tim’s first novel, Zeus of Ithome, a historical novel about the struggle of the ancient Messenians to free themselves from Sparta, was published by Crooked Cat in November 2013; his second, Revolution Day in June 2015. Tim also writes poetry and the occasional short story, plays guitar, and likes to walk up hills.