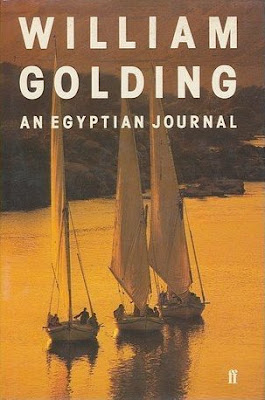 
Published in 1985 this book charts Golding’s experiences, in the previous year, as he travels down the Nile with his wife, and a motley crew at the behest of his publisher.
At this point in his career, he had been awarded the Noel Prize for literature, had won various other accolades and had 11 novels published along with some notable travel pieces, books of poetry, some non-fiction and his only full-length play, The Brass Butterfly..
Like me, Golding, had a life-long fascination with ancient Egypt, so one has to ask the question – what took him so long?  Born in 1911 he would have been 73 when he took this trip.  I made my trip to Egypt at the age of 35.  I remember announcing my intentions to my family and then promptly going out a few days later to make all the arrangements with the travel agent.  And OK, I made my journey several years later than Golding, but, it was interesting to note as I worked my way through the book, that some of the frustrations I witnessed and felt about Egypt, had been there when Golding made his.
Beginning in Ma‘adi, just south of Cairo, as I did, Golding takes you with him as he sources and secures a small river cruiser to take him down the Nile to Luxor.  And so begins a chapter by chapter discourse of each day of his cruise.  Not that he had the same level of comfort as I did.  He complains about the lack of regular meals, the lack of heating, enough bedding, wardrobe space, his own overpacking and much more besides.  The most important lesson for Golding to learn, though, was how NOT to be the Captain of the ship!  His eminent naval career may have prepared him for life at sea and in war, but taking a step back to become a passenger on a ship was not one of them, much to my amusement as I read the details of these regular little clashes between ex-naval officer and Egyptian river boat Reis.
The monuments visited play their own individual roles throughout the text and I was glad to see that, in telling the ancient history, Golding maintained the easy narrative flow.  However, despite the history, the detail of the look of the monuments, it is no substitute for the wonder of seeing these incredible pieces of history for yourself.  Luckily, I had my own memories to draw upon to supplement Golding’s thoughts and descriptions.
One other thing that Golding comes back to again and again, was an issue for me, too, when I was there.  There’s an inconsistency to Egypt, its history, its people and culture, that he could not rationalise.  Neither could I, and having finally read his book, I’m still none the wiser.  Still a riveting read, though!
Posted by Angela Wren at 06:00