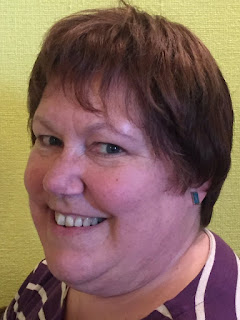 ... to the blog today to talk about plotting her second book, Hunter's Revenge.  So, Val, I'm a spreadsheet plotter myself, but what about you?
VP   Thank you for having me on your blog today, Angela.  It is lovely to be here and be able to share the writing of my new novel 'Hunter's Revenge' and how I went about plotting the story.
I think that plotting is central to writing a novel, but it is a highly individual process.  No two authors plot in the same way.  Some plot organically while others plot in a very orderly fashion.  Many writers even plot differently from one book to another.  Some write scenes: hundreds of scenes that interest and excite them and then they stitch the scenes together to from the novel.  While others visualise the way the book will take shape using dozens of bits of paper laid out on their desk or even on the floor.  It must be important to make sure the windows are closed if you plot this way!
Some authors use tree diagrams, spreadsheets or mind-maps to plot and there is software available to download online for this.
However you plot your novel, the goal is the same, to allow the journey the plot is about to take, that will last several months, to become a novel.  It is important that you, as an author, choose between the 'organic' and 'orderly' methods of plotting so you are comfortable that your choice works best for you and the book you are setting out to write.  I plotted my first novel 'Hunter's Chase' organically but, after attending a course run by Sue Moorcroft at last years' Swanwick Writers' Summer School, I plotted the sequel 'Hunter's Revenge' using diagrams and spreadsheets.  Neither is wrong.  Both have strength and weaknesses and either can be successful for crafting a novel.
Writers who follow an organic way of plotting, approach the outline largely as a form of awareness of the story, rather than as an actual document to be followed strictly.  Many view the outline not so much as a planning device but more of an analytical tool that helps strengthen the final draft by indicating the flaws in the story-line.
Some authors begin with an idea and just jump in to tell the story.  They write steadily and regularly until they have written tens of thousands of words.  Then they go through the organic draft and delete large chunks and add other pieces until the final manuscript is complete.
Other authors, like Sue Moorcroft, plot meticulously and there is no doubt that plotting an outline is hard work.  However, having undertaken an outline on 'Hunter's Revenge', I found myself writing my novel with confidence.  I was happy that one chapter followed another in a sensible sequence.  My characters retained their identities.  Of course, at the end of the first draft, there were flaws, but I found I was able to repair those readily. Whether you plot organically or in an orderly fashion, the important issue is that you can tell the story to your readers and that you, and they, are satisfied with your novel. 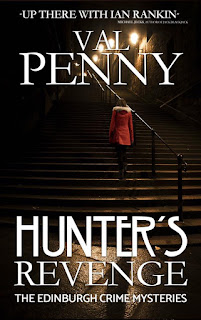 about the author... Val Penny is an American author living in SW Scotland.  She has two adult daughters of whom she is justly proud and lives with her husband and two cats.  She has a Law degree from Edinburgh University and her MSc from Napier University.  She has had many jobs including hairdresser, waitress, lawyer, banker, azalea farmer and lecturer. However, she has not yet achieved either of her childhood dreams of being a ballerina or owning a candy store.  Until those dreams come true, she has turned her hand to writing poetry, short stories and novels.  Her crime novels, 'Hunter's Chase' and Hunter's Revenge are set in Edinburgh, Scotland, published by Crooked Cat Books.


and here's an excerpt for you to enjoy...

The last thing Georg did on his eighteenth birthday was kill a man.
He really hadn’t meant to kill the Stasi officer in front of him, but it was him or Georg – and Georg did not want to die. It was the first time he’d seen a corpse. The streets were slick with ice. The man lost his balance and cracked his head on the pavement. Georg stared down at the body: there was blood and brains all over the pavement. He looked into the officer’s eyes. They stared blindly to heaven, but Georg knew there wasn’t a Stasi officer on earth who was going there. He looked away from death and towards his friends in horror, but when they saw what had happened, they scattered. Georg picked up the officer’s gun and began to run. More Stasi officers appeared as the boys fled.
Georg was out of breath when he got home.
“What’s the rush, son?” his father asked.
“Shit, Dad! It’s bad.”
“You’re drunk! No language in this house, boy,” said his grandmother.
“Dad, the boys and me were leaving the bar to come home and we saw a Stasi officer”
“So?”
“We were laughing and having fun.”
“And?”
“For a laugh I knocked his hat off.”
“Idiot! You know Stasi have no sense of humour. Ever. So what next?”
“He pulled his gun and told us to stand silently against the wall.”
“And you apologised and complied, I hope.”
“I panicked and punched him. He slipped on the ice and fell over. He hit his head on the ground, and when I checked him, he wasn’t breathing. He was dead. I just took his gun and ran.”
The silence in the room was deafening.
“You did what? You f— idiot! Did you really punch a Stasi officer? Are you mad? You know we don’t even have to openly engage in resistance to draw the attention of the Stasi and incur its retribution. Just failing to conform with mainstream society can be enough. Shit! I sired a fool.” Georg’s father’s red face reflected his rage.
“And now you are here,” his grandmother added. “You ran home, leading them straight to us. We will all die now. Thank you.”
“What is all the noise?” Georg’s mother came through from the kitchen, drying her hands on her apron. His twin sister Ingrid and younger brother Wilhelm followed her. They looked bewildered. Their father rarely raised his voice, especially not to Georg.
As his father explained the issues, Georg’s mother burst into tears.