… has set feee one of the characters from her book Kindred Spirits: Royal Mile  It is with great pleasure that I can introduce you to, David Rizzio. Thanks for being here David and why don't you tell me a little about your story
DR   It’s a strange thing, to label a man as a good friend, when he was once part of a plot which resulted in your murder.  Even stranger though, that an Italian musician somehow became somebody seen as important enough to need murdering. But there we are.
AW   I see… I think!
DR   I should introduce myself properly.
AW  Yes please… I am a little confused to say the least!
DR  My name is David Rizzio, and I was of noble birth, not what you might have thought, for a man who started his courtly life in Scotland as a lowly musician.  I was a good musician mind, and finding no particular means for improvement in my position in Italy or France, I asked a friend for some guidance.  James Melville it was, and he got me a position in the court of Mary, Queen of Scots.  She was a fine woman, and an excellent queen, just, perhaps not the best chooser of husbands.  But more on that later.  Well, I’m a good man as well as a good musician, and I can make myself useful.  After only a couple of years, I found myself promoted to the Queen’s Secretary, with a healthy salary to go with it.  Alright, I might have over-reached myself and my powers once or twice, but I was a man Her Grace could rely on, somebody who wanted only to help her.
AW  But you mentioned murder…
DR  The rumours started. I suppose it is only natural, when a young man begins to give advice to a beautiful young queen; people love a scandal, especially when it concerns affairs of the heart.  I loved Queen Mary, but as her servant, and employee, not an actual lover.  And she returned these feelings, platonically.  She still does, I am proud to say.
AW  Go on…
DR  Back to the murderer/friend thing though.  As I say, people got jealous, and angry, especially her husband, Lord Darnley.  Nothing but a wastrel if you ask me.  Then and now.  He decided I was a threat to his position and power, and that I needed to be removed.  Oh, how I was removed… They burst into one of the smallest rooms in Holyrood Palace, whilst Her Grace was dining with a small group of us, and they, well, how could they do this – they held a pistol to her pregnant stomach as they dragged me out of the room.  I’m not ashamed to say I was terrified.  I hid behind her, even tried to cling to her skirts as they pulled me away.  It was no use.  Over fifty stab wounds, I endured.  All that blood.
It only took a few minutes to work out that I’d become a ghost.  I was looking down on my own body, the way poor Queen Mary sobbed over me, the way those cowards had run away, it was somehow hard to turn away.  So I didn’t.  I stayed with her until the end. Another two decades of following her progress, and being there as much as I could do. Then of course she joined me on this side of the divide.
AW   And then what? 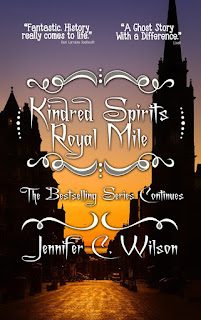 DR  I never imagined I could go back to the way things were, but somehow, that is exactly what has happened.  Of course, I don’t stray too far from Edinburgh these days, not like her, always off adventuring, but when she is in the city, myself, Janet (Lady Glamis) and Sir William Kirkcaldy serve her as an inner circle of sorts.  And that brings me back to the start. Sir William was an accessory to my own murder.  Meeting him again in this life was a strange, strange thing, but he had returned to serving my queen by the time he died, another man who gave his life for this poor woman, and we have reached an arrangement.  After all, with so many centuries now passed, there is plenty else we can discuss.  Such as how to deal with Darnley, when that wretch turns up in the city.  Something will have to be done, that’s for sure; the way he torments me and the queen is quite unfair.
In truth, things are just as busy in Edinburgh as they ever were.  His Grace King James V is still about, although granted not as outgoing as his daughter.  And Queens Marie of Guise and Madeleine of Valois are incredibly nice ladies, albeit quieter than Queen Mary.
That’s me and my current situation then.  In truth, I have more friends in death than I did in life, and from so many walks of life.  It is true that it can get a bit rowdy from time to time, when the likes of Boots starts haunting the punters of those ghost tours they do, but most of the time the haunting is calmer.  We are quite a noble clan up here, after all.  You should come and say ‘hello’ – we’re a friendly lot, most of the time.  If you want to read more about our adventures, then Jennifer has, at least, found time to write those down.  And she hasn’t done too bad a job in capturing us, to be fair.
AW  Well, David, thanks for the invitation to come and join you.  I'm rather hoping that I won't need to take you up on that for quite some time yet.  But before you go, can you tell us a little about the books? 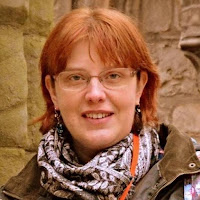 DR   Her best book (i.e. the one with me in it) is Kindred Spirits: Royal Mile, released in June 2017, but there was one before that too, Kindred Spirits: Tower of London.  That one’s alright.  All about Richard III and Anne Boleyn, from what I can tell.  There’s a third one, Kindred Spirits: Westminster Abbey, coming out this June.  My beloved Queen Mary is featured in that one, so it must be good.  Jennifer has also self-published a historical timeslip romance, The Last Plantagenet?
AW  Lastly, can I just say thank you for being here today… David? Where did he... Jennifer… Are you there Jennifer?  Is there anybody there?