Postcards from Auvergne with Marie Laval... 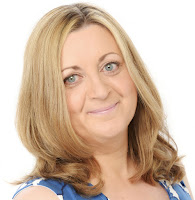 ... I have the great pleasure to welcome friend and author, Marie Laval, to my blog today.  We're talking about the Auvergne - one of my faviourite areas of France to visit.  Marie you're just back from France, what have you got for us...
ML  I thought it would be easy to write about my recent holiday in Auvergne, about its beautiful countryside, lovely villages and chateaux (the region counts over 450, most of them private), or the many restaurants with their cheap and delicious 'menus ouvriers' (workmen's menus).  I  was wrong. There is so much to write about I found it really hard to choose, so I will focus on two very special places that captured my imagination.  The first is Souvigny, a quiet and unspoilt little town located in the Allier département, North of Vichy.
AW  Souvigny!  It's quite a while since I was last there.  Please remind me what it's like...
ML  We wandered the quiet streets lined with stunning medieval and Renaissance houses, including the ruined former palace of the Bourbons, and did a bit of shopping in the 'Herboristerie' before visiting the Priory Church of Saint-Peter and Saint-Paul.  There is a quirky legend about that church, which is very grand for such a small village.  It was supposedly built by fairies in just one night, and when a local milkmaid saw it emerge from the morning mist, she was so shocked she was instantly changed into stone.
The Church dates from the 11th and 15th century, and is a testimony to the importance of the town as a pilgrimage centre and as a centre for the Bourbons who ruled much of the region at the time.  The interior is stunning, not only because of its mix of Roman and Gothic architecture, but also the chapels with sepulchres of Bourbons dukes dating back from the 14th century.  The church also hosts the sepulchres of Saint Mayeul (Majolus in English) and Saint Odilon, two of the most revered abbots from the prestigious Cluny Abbey.  Next to the church the lapidary museum is well worth a visit too, with its famous 'Zodiac column', a 12th century column with carvings representing harvest or grape-picking scenes, but also fantasy animals and monsters, and the signs of the Zodiac.
What I loved the most however were the priory gardens.  They were organised by the capitulary De Villis, which was edited by Charlemagne in the beginning of the 9th century, and which recommended the plantation of 90 plants known for their medicinal properties in monastic and laymen's gardens.
The gardens are a riot of colours and scents.  You will find garlic, roses, tansy, common sage, mustard, marigolds, leek, carrots, parsley, muskmelon, cardoon, coriander, cucumber, tarragon, rocket, parsnip, radishes, sage, burdock, flax, mallow, chicory, lettuce, to name but a few!     When we were there, there was an exhibition of  'bancs poèmes' with artists designing benches to illustrate a poem of their choice. Some of them were a bit strange and very impractical, but others simply stunning and were it not for the price and the impossibility of packing one in my suitcase I would have loved to take one home!
You can find more information about Souvigny here.
AW  I'd forgotten there wass so mcuh to see there!  You said there were two places, so where are we going next?
ML  The second place I fell in love with is Montaigu-le-Blin, a village we discovered by chance as we were driving through.  Apart from the medieval castle standing on a small hill which is being renovated by young volunteers, this tiny village boasts several magnificent bourgeois houses ('maisons de maître'), a tiny and delightful Roman church, and a ancient wood with two 'magic' stones, named God's Font and the Devil's Font.
We had a stroll through the village streets and sat down in the large village square - a listed site with over 143 chestnut, oak, lime trees, many of them dating from the early nineteenth century.  The village has two renowned auberges on opposite ends of the square, but sadly they were too expensive...
AW  That's somewhere I haven't discovered yet, but it's marked on my map now!
ML  There are so many other places worth visiting, especially if, like me, you like chateaux.
AW  I most certainly do.
ML  The chateau of La Palice with its fascinating history (more information about it here) and the charming Renaissance chateau de Chareil-Cintrat, set amongst ancient vineyards which boasts unique wall paintings (more information about it here).
A week wasn't enough for all the places we wanted to see, and I hope we can return very soon...
AW  Marie, thank you for visiting and for giving up some of your very valauable time to tell us about the Auvergne.  Most interesting.  I hope you make back there soon, I know I will be planning a trip there in the very near future.