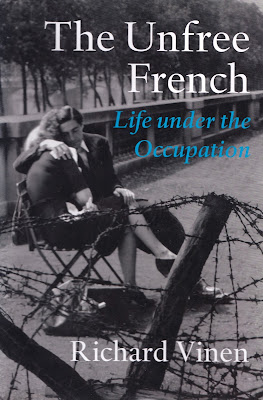 I came across this book by accident.  I was looking for something else but Amazon decided to tell me about it - this is something that usually annoys the hell out of me.  However, on this occasion, I am so glad the book giant did bring this tome to my attention.
Richard Vinen,  according to the acknowledgements at the front of the book, took a 'disgracefully long time' to create this treatise on France during the 39/45 war.  I'm very glad that he did.  Rather than rehashing and re-examining well known military history and strategies, he searched archives, scrutinised reports and read memoirs both published and unpublished.  As a result the source notes and bibliography are extensive.
This is not exactly a history book, in the usually accepted sense of the word, but it is a fascinating document that showcases how ordinary people lived and worked during the occupation of the northern half of France and the period of the Vichy government in the south.  The narrative voice is gentle and flows well and the detail keeps you turning the page.
Beginning with the defeat of France in 1940 and the subsequent partition into occupied territory and Vichy, Vinen presents some startling statistics - startling to me anyway!  Two million French soldiers were taken prisoner and 6 million civilians left their homes and joined convoys of people and refugees trying to escape their own homeland.
Set against the enormity of that, the author brings to life the agonising choices ordinary people had to make.  He explores what it was like to live in towns and villages that had been emptied of young men who were either Prisoners of War or who had been conscripted to work for the Reich in Germany.  He then zeros in on individuals.  For example, Louis Althusser, POW, who claimed that after 'altering his papers' he was able to make himself available for repatriation.  Léo Malet used his experiences as a POW to create a fictional detective who began his career in a camp that closely resembled the Stalag where the author had been incarcerated.  And then there are the stories of the women left behind and in particular, the actions of some Parisian gentiles who wore yellow stars.
What I found especially interesting was the way Vinen was able to chart the changes in attitude and opinion of the ordinary people of France during an especially difficult time in their history along with the detail of lives lived, judgements that were constantly questioned and decisions that were agonised over.  The introduction I found a little tedious but the opportunity to look at, almost spy upon, that period of French history far outweighed my initial and very short-lived discomfort.  A fascinating read that I feel sure I will come back to again and again.
Posted by Angela Wren at 06:00