The Cat on the Dovrefjell...

... I've always loved fairy stories, folktales, myths and just about any kind of story, since I was a child.  My father was a great story teller and I suppose my constant need to write stories down has, in some way, been inherited from him.  The story below was one of my favourites.  I believe it is Norwegian in origin - or at least that's what dad always said - and I've recorded it here as my dad used to tell the tale to me... 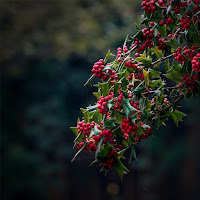 Once upon a time, far, far away in the snowy north of Scandinavia, a very brave man called Ale caught a great white bear.  He trained it and looked after it and then decided that he would present it to the King as a gift.  So Ale began his long journey from somewhere close to the North Pole, over the ice and across the sea to Norway.
His journey was long and it happened that, on Christmas Eve, as he descended Dovrefjell he saw a lonely cottage and thought he and his bear might spend the night there.  The cottage, deep in a forest, belonged to a man called Halvor.
'I need a place to rest for the night for my bear and myself,' said Ale.
Halvor shook his head in sorrow.  'It's Christmas Eve,' he said.  'Very soon there will not be a room in my house to spare.  Every Christmas Eve a pack of Trolls come down from the mountain and take over our humble little cottage.  There is never any room for us, let alone a traveller such as you.'
Ale was shocked.  'You are forced to leave your own house at Christmas time?'  Halvor nodded in shame.  Ale wondered what to do next.  His bear muzzled him gently at his back and an idea came to him.
'Let me have your house this year,' said Ale.  'Make ready whatever is needed as you always do and then leave and let my bear sleep under your stove and I will sleep in the tiniest room at the top of the house.'
Halvor protested, he feared so greatly for the safety of his new companion and the bear.  But Ale assured him that he and his bear would be safe. 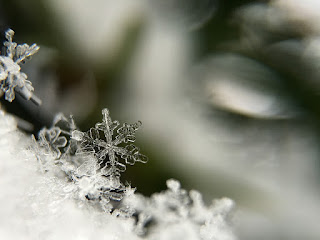 With only a couple of hours to spare, Halvor, his wife and children began to prepare for the Trolls. They set tables with the best linen and plates. They put out bread and sausages and slaw and fish and porridge and every imaginable kind of food that you would always see at a humble, but celebratory feast.  When all was ready, Halvor and his family left with sorrow in their hearts for Ale and his bear.
The first few flakes of snow fell as what little grey light disappeared into night. And the Trolls came down the mountain shouting, 'HALVOR, Halvoooor, Halvor, Halvor...
Some were ugly, some had long noses, some had warts, some were tiny, some had tails but they were all frightening and greedy with hunger.  They didn't knock when they reached the cottage.  They barged in and attacked all the food, and ate and drank and ate some more until nothing but a small piece of sausage was left.
The tiniest of the Trolls picked it up and sniffed it.  Catching sight of the great white bear lying under the stove, the Troll put the sausage on a fork and sidled over to the sleeping giant.
'Here, Kitty, I have something for you,' the Troll said, pushing the fork up against the bear's nose. 'Here kitty...'
The bear stirred and stretched and growled and rose up on four great paws and let out a tremendous roar and chased the Trolls from the house out into the snow and chased them and hunted them all that night, returning only when the first weak light of a new winter dawn began to appear.
The following year on Christmas Eve, Halvor was out in the forest chopping wood in readiness for the Trolls to arrive later that day. As he was hard at work he thought he heard someone calling his name. He stopped and listened. 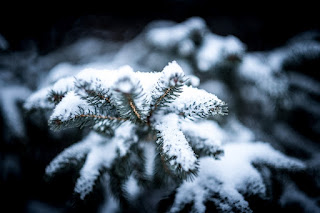 'Halvor!' called a thin reedy voice from the trees. 'Halvoooor!' called another gruffer voice from behind him.  'HALVOR! Halvor!' called other voices from all around him.
Halvor brandished his axe. 'Yes I'm here, what do you want?'
'Is your big white cat still with you Halvor?' This was a deep, gruff voice from behind a tree only a few feet away.
'Yes, she is,' said Halvor. 'And she now has seven white kittens who are even more fierce than  she is.' Halvor waited... and waited. But there was never any response and from that day on the Trolls have never taken their Christmas supper on the Dovrefjell.