... to talk about her latest book.  Welcome Gill and please tell us about...
The Butchers Daughter
Were you to be standing in London on a still late-summer's evening, exactly a century ago, you may well have heard the rumble of artillery fire drifting across the channel from The Somme.  The battle that began at the beginning of July still raged.  The prime of English youth was being slaughtered. There seemed to be no end in sight.
Deep in the Shropshire countryside, the war was casting its long shadow across the village of Eyton. Florence House, a specialist orthopedic hospital, now dealt with the casualties as every day shipments of dreadfully maimed and wounded young men arrived.  The early X-ray machines designed to diagnose deformities in children were now used to locate fragments of shrapnel in injured soldiers.  The womenfolk of the village helped care for them.  Their sons, lovers and husbands had long since gone to fight for king and country; some never to return.

Refused by the army through ill-health, Bill Smith is directed to work at the village post office.  He comes from a traveller family, and their arrival in Eyton is unpopular.  It is at The Methodist Chapel that he first spies Nora Snow, daughter of the local butcher.  John, her father, is a belligerent bully, highly protective of his daughter.  In his mind no man is good enough for her – especially the upstart son of a “no good tinker” like Bill Smith.
Set against the backdrop of WW1, this is the story of how, against the odds, Bill and Nora fall in love and eventually marry.  Despite the turmoil of the early twentieth century their story has a happy ending – a long happy marriage, a son and two granddaughters, one of whom is me! 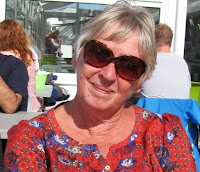 When I retired from teaching I resolved that I was going to “write that novel”, and write it I did.  I joined the local writers' group where I met Angela.  She witnessed my early attempts at writing, giving constructive criticism and support all the way.

My first book was Ada, the tragic story of a young woman who chooses the wrong man and has to face the consequences.  It has been well received with reviewers saying “Ada exposes an outwardly solid relationship as a betrayal of love and loyalty,” and “A fascinating story putting together the pieces of a puzzle... a vivid picture of how one woman stays true to herself.”
The Butchers Daughter is my second novel. Based upon the true story of my paternal grandparents, it too has received good reviews.  “I think you write really well Gill- you have a wonderful sense of drama and pace and you evoke the period wonderfully.” ( Luigi Bonomi , LBA publishers, London)

Follow the links to find the books Ada  The Butcher's Daughter