The summer is almost with us and today, author Jane Bwye is providing the first in a series of posts about travel and life in foreign countries.  Jane...

Thank you, Angela, for giving me this opportunity to do what I love most – travel to a foreign country.  Only this time, you say I must link it with my book.  What a great idea!

For most people, Africa is a foreign country, but has anyone thought of the effect tourists might have on those living there?  In my family saga set in Kenya the main character, Caroline, goes on safari to Tanganyika (now Tanzania).  Here is an excerpt which touches on the differences between neighbouring countries.  Even in Africa they are subtle but real.  Many local people, while appreciating the income derived from tourism, nevertheless cannot help feeling resentful at the perceived invasion of their lives.

They came to a sleepy village nestling under a canopy of umbrella thorns.  The yellow branches glowed in the hot sun.  Brian bought them ice-cold sodas at a wayside duka.  A herd of enormous elephants encroached on the road, blocking the way up a tortuous escarpment, before they emerged on a plateau above Lake Manyara.  They stopped for tea at the lodge overlooking the lake, which was lined with a thin border of flamingos.
“Not nearly as many here, as in our Lake Nakuru,” mumbled Caroline, dropping some cake crumbs onto the paved floor of the patio.  She watched as a flock of superb starlings swooped in a mass of glossy blue, orange and white from a nearby thorn tree.  They squabbled over the crumbs, and then stood by waiting for more. 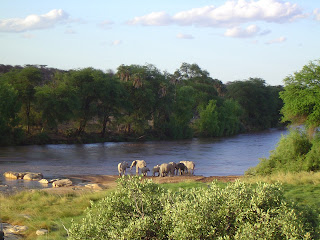 “But those elephants we saw at the foot of the escarpment were much larger than any you can find in Kenya,” Brian reminded her, smiling warmly, his eyes brim-full with humour.
As they were about to leave, a woman emerged from the lodge, dressed in traditional African garb.  Voluminous folds of cotton in bold patterns of red, black, and green, adorned the ample figure.  A red and yellow headdress rose in striking splendour over the chubby face, which was flushed with sunburn.  She swept forwards, her garment brushing the floor. She produced a camera cluttered with lenses, adjusted the focus, and in a loud American drawl tried to direct the African tour guide into position at the door of their minibus.  He was a slight man uniformed in spotless khaki, and regarded her with despair, but posed obligingly.
Caroline could not resist the spectacle.  She caught Brian’s eye and reached for her camera.
“This will be one for the album,” she whispered as she included the tourist and the tour guide in the frame, and clicked the shutter.
She noticed Mwangi watching, and smiled to include him in the joke, wondering what he thought of it all.  His implacable eyes, reduced to pinpricks of black stone, bore into her. They flicked towards Brian, and then he turned away. 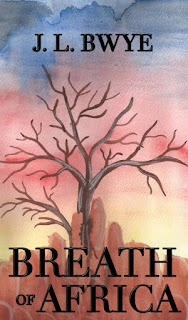 About the author  Jane has been a businesswoman and intermittent freelance journalist for fifty years, mainly in Kenya.  Six children and seven grandkids are scattered over three continents.  She developed a taste for travel, and in 2001 'walked' round the world, buying a bird book in every country she visited.  She has written numerous magazine articles and short stories, two newspaper columns and several newsletters.  She co-ordinated a cookbook, 'Museum Mixtures' in aid of the Kenya Museum Society in 1989, and has written a History in commemoration of the fiftieth anniversary of her local church, St Wilfrid's.  Breath of Africa, which is dedicated to the people of Kenya, is her first novel, published in 2013.  I Lift Up My Eyes, published in 2014, is a novella set in East Sussex.

About the Book  Caroline is a priviledged woman from the highlands, and Charles Ondiek, a farm labourer with dreams of Oxford.  A drama of psychological terror is fuelled by Mau Mau oath administrator, Mwangi, but against the backdrop of Kenya's beautiful but hostile desert, the curse is finally broken.

Information about Jane’s book, Breath of Africa, can be found on her website: http://janebwye.com/mybooks/breath-of-africa
And you can find her Amazon Author Page here: http://www.amazon.co.uk/-/e/B00BOK0NN4/
Posted by Angela Wren at 06:00