An interview with author Jacqueline Creek...

AW  Hello and welcome Jacqueline and thank you for agreeing to chat to me today.  So, what is your current release?
JC  The first volume of my autobiography, ‘The Girl with the Emerald Brooch’, is due to be published before the end of February.  It is written as a novel and told in the first person while allowing the story to unfold through the characters.  It focuses on growing up in industrial Sheffield in the 1950s and 60s.  The plot twists and turns and is realistically gritty, but with a fond nostalgia for the past.  The houses on the cobble streets where I grew up, a stone’s throw from Sheffield Wednesday’s football ground, have now been demolished.  The street where I lived still remains along with its nameplate.  The book will bring laughter and memories to many people in the same way that ‘The Full Monty’, ‘Brassed Off’ and ‘Kes’ do.

AW   What first got you into writing and why?
JC  I’ve always had an artistic side and a strong need to express it.  As a child I excelled at Art and Composition, as it was called in those days, but I didn’t pass the 11+ exam (spoiler alert!) and ended up at Chaucer Secondary Modern, where my dreams were not going to be recognized and I hardly attended during my last few months.  Going on fifteen years old, I took time out to take wallpapering jobs my Mum found for me.  This was encouraged more than ‘pipe-dreams’.
After twenty years of varied employment, I set up my own business, which grew and grew.  When I retired and turned seventy, many people asked me to write my life story but I didn’t really think anyone would be that interested.  Instead I carried on writing poetry, which is something I had dabbled in previously.  Then I began writing erotica, which was appraised and credited by Primula Bond.  Animal stories – told by the characters themselves - came next and then flash fiction.  I suppose I was finding my niche.
I joined Barnsley Writers’ group and Penistone Poets’, where I found two lovely groups of people who liked my style and encouraged me to do more.  It was after hearing my life story that the autobiography changed from ‘an option’ to ‘a must’.  After writing the first chapter, I received the Silver Quill Award, for best opening chapter.

AW  You write poetry and novels.  Is it all imagination or do you also undertake research?
JC  With my poetry and stories, I love bringing the characters to life.  So when I started to write ‘The Girl with the Emerald Brooch,’ it all fell naturally into place.  I’m concentrating on my book at the moment and have a great memory for such details and a good imagination, which helps.  I’ve had to do some bits of research to remember such things as the date the trams stopped running and the cost of a pint of milk in the fifties.  The detail I include is just enough to whet the appetite; I don’t want the story to be bogged down with a lot of historical events.  I have read such books and have found the story gets lost in the jargon.  In my stories, the era can usually be depicted by the characters, with their dialogue, gestures and style.

AW  Have you ever had to write a scene that was especially difficult and how did you do it?
JC  This is a difficult question to answer because, if I were to be truthful, I would give far too much away.  As I write mostly from my own experience, some scenes are emotionally difficult to capture, such as writing about traumas, bereavements and break-ups.  So, read my books and all will be revealed and understood.


AW  Famous authors, such as Roald Dahl and Dylan Thomas, had a special space for writing.  Do you have a writing 'shed'?


JC  I think it would be a bit cold writing in a shed just now.  I can write anywhere that’s peaceful and interruption-free.  Although my favourite room is my garden room, it has too many distractions.

AW  Gorgeous view there, Jackie!  Finally, if you had a whole afternoon to yourself and could choose to spend it with a character from a book.  Who would it be, and what would you want to discuss?
JC  I am a great fan of Lee Child and of Jack Reacher, the character he created.  I was overjoyed when I heard a film was going to be made.  But then mortified when I heard Tom Cruise was going to play Jack Reacher.  Don’t get me wrong, Tom is a good actor and made some super films, but in reality, he is the exact opposite to the character of Jack Reacher and reminds me of the differences between Arnie Schwarzenegger and Danny DeVito in the film ‘Twins.’  Over dinner with Tom, I would ask him what so enthralled him about Jack Reacher that he so desperately wanted to play him?  I’m sure I would be intrigued by his answers.  It would be even better if Jack could join us and I could get his thoughts on Tom’s answers! 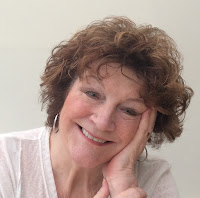 Jacqueline Creek
Born in 1944 I grew up in Sheffield to the sound of the steelworks’ hammers.  At ten years old I had dreams of becoming a doctor/surgeon. But to do this, a scholarship had to be won and I failed my 11+!
I left school at fifteen and eventually settled into regular work as a shop assistant at a local pharmacy.  I married at twenty-one and did various jobs, but was never totally satisfied.
A new man came into my life at the age of 35 and I started my own business, which grew into a retail outlet and a factory and employed over thirty people.  Retiring in 2012, I took up writing, and now live in the foothills of the South Pennines, with our assorted rescue dogs and surrounded by an abundance of nature and wildlife.

The Girl with the Emerald Brooch

This wonderful tale, set in the industrial city of Sheffield in 1954, tells of a young girl forced unexpectedly to look after her ailing mother, aged father, five year old sister and three-week old brother.  At this tender age when she should be playing with her friends, she is coming to terms with both birth and death.  And then her mother shocks her by giving her an emerald brooch and telling her a secret.  You will be gripped from the first sentence as you meet her family and friends.
If you enjoyed Catherine Cookson and Call the Midwife, you will most certainly enjoy these books.  Available to purchase from the end of next month.
Posted by Angela Wren at 06:00